I found the Practical Angler by W.C Stewart online. As I have heard a lot of nice words regarding the Stewart Black Spider it caught my interest. So I read through the book, the chapter of flytying got my biggest interest of course. I got very fascinated in the writing, the thoughts presented by Mr Stewart, and I got the feeling of that not much has happened the last 150 years.
After reading it I got stuck with his "Three killing Spiders" Black Spider, Red Spider and Dun Spider. I felt I just had to do something to show my respect to these fantastic little bugs. I started with the most famous one of them. 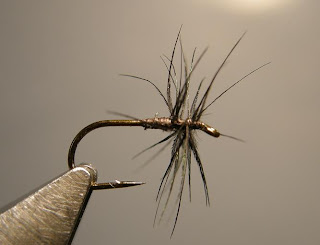 Black Spider
Hackle: Starling
Thread: Brown Pearsall´s silk
The "Spider" more known to the word as the Stewart´s black spider is actually not Mr Stewart´s own pattern He mentions in his book that -the pattern was shown to us by James Baillie and has never been missed in our boxes since. So you could say Mr Baillie showed the fly to Mr Stewart and Mr Stewart showed it to the world.
After this fantastic pattern I continued my quest with giving the Red Spider a chance. 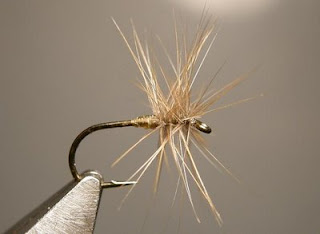 Red Spider
Hackle: Landrail
Thread: Yellow Pearsall´s
And as the third of the three killing spiders, was the Dun Spider. This one got me most confused as Mr Stewart left out the colour of the thread in the book. My first thought was then that it should have the same colour as the hackle, I felt that it made sense in some way. I thought Black spider -the dark one, Red spider - the light coloured one and finally the Dun spider as compromise in between. Well I obviously thought wrong, I thought Dun was grey when it is more gray, yellow creamish. I finally found out that the colour of the thread should be yellow. 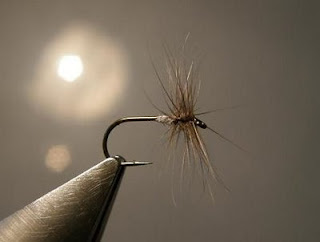 Dun Spider
Hackle: Dotterel or Starling, inside wing
Thread: Yellow Pearsall´s
I must say that I got really fascinated of the whole thing with these spiders. Reading the book, making the flies etc. I felt I needed even more of this, I wasn´t quite ready yet.. So I decided to make my very own tribute to W.C Stewart. I made three decent buggers and while doing them I started to think of the layout. Found a nice picture in the beginning of the book, also borrowed the book´s title. And finally I was ready.. 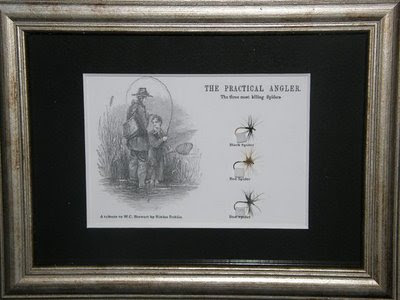 Next quest will, of course, be to try these bugs out on the fish.
Upplagd av Niklas Dahlin kl. 10:23 Inga kommentarer: