Evening dear followers, today I played with a pattern called "Mörke John" ("John the dark"). The fly is a variant of the more famous "Europea 12", same fly but with different colour. The fly "Mörke John" comes from the vise of Harry Strandberg who comes from the northern part of Sweden. Harry is unfortunatly no longer with us, he passed away a couple of years ago. My friend Leif Milling has written a nice pieca about his friend Harry in his book "Länge leve flugfisket" (Flyfishing, may it last forever), Harry was actually one of the first professionell flytyers of Sweden. 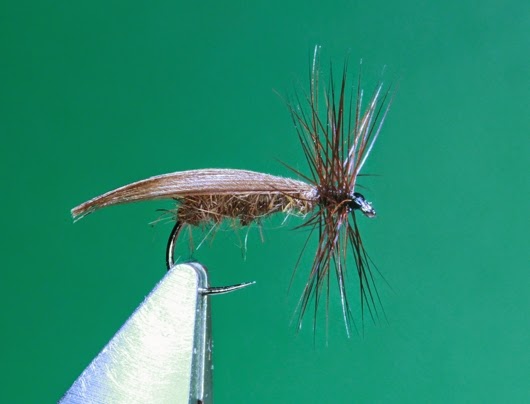 I like the apperence of the pattern, and after fishing in caddishatches in the parts of where Harry was active I do understand why hw choose the darker colour.

While tying this fly I decided to take some pictures to tell my friends how I do the hackle and how I finish of a hackled fly leaving a decent head. As we all know this information is more for the eye than for the fish... I dont either think the fish cares if theres a bump at the head or if we have some hacklefibers sticking out here and there. But I do belive in the satisfaction a really nice fly in my flybox gives me.

To get an nice and straight hackle on your dry flies can sometimes be an pain. Well offcourse thereś a question of the quality of the hackle, but not just that. Some really nice hackle can have stems that are not entirely round and sometime the stems are kind of thick which also can make it harder. Well anyway, here I want to share some thoughts of mine that has helped me to get a slightly better hacklecollar on my flies.


I use the best hackle I can get, I use Whiting, Charlie Collins and I also have a Keough that was awful until my friend Roy Christie dyed it for me, after that the stems got softer and by that the hackle got easier to work with. When I started to tie I had som Indian capes, I have heard that you can find decent quality, but the nice ones that I have found dont have the length of the feathers in the sizes I tie. So I have given that up and I stick to the genetic stuff.

Well then, let me try to explain, start with making sure that you have a nice and even foundation, bumps can make your hackle slip. Tie in the hackle in and set it into an 90 degre angle towards the shank of the hook. Make sure that the hackle has a bare stem the first wrap, that will help us to not get any fibers pointing backwards. 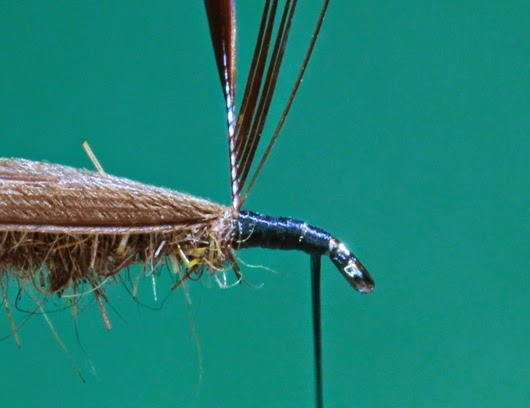 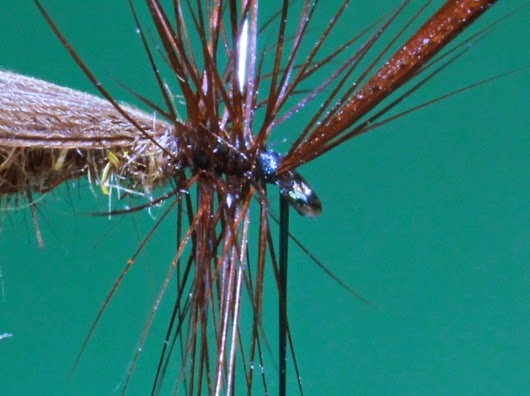 Grab the hacklepoint and fold it backwards, wrap another three tight turns of thread but now backwards away from the eye of the hook. By doing this we have locked the hacklepoint. 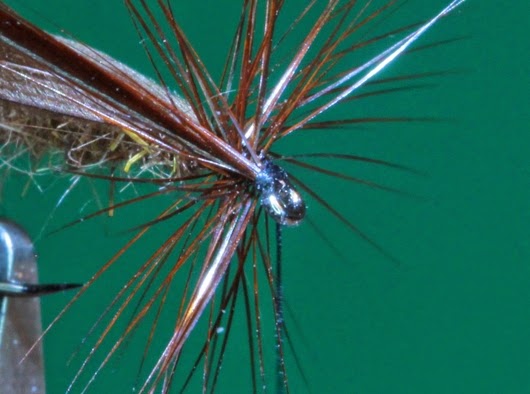 Take your hacklepliar and attatch it to the hacklepoint, hold the thread tight as you start winding the hacklepliar. After a couple of turns the stem of the hacklepoint will brake off at the point of where we are have the preasure on the tying thread. 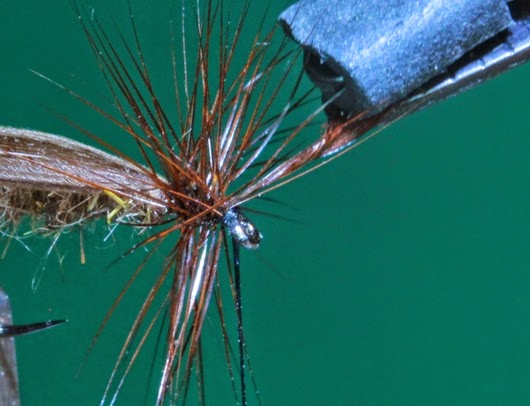 Here we can see the result after that the hacklepoint has gone. Now give the head two wraps of thread and finish it of with two whiofinish knots. 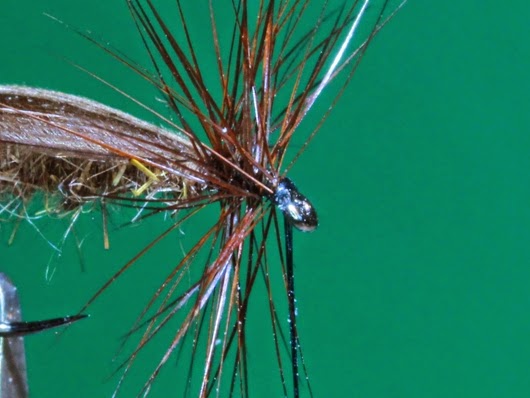 Cut the thread and give the head some varnish. Done, with a nice and clean head. Satisfaction on a hook... 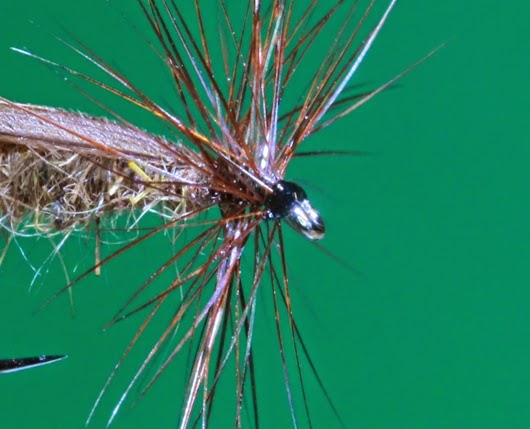 Hope you enjoyed it this little session,  I did..

Last weekend  It was time for Swedens biggest fishingfair, the Sportfiskemässan at Kista, Stockholm. This fair is about fishing in common, but it has a reasonable amount of flyfishing. I have been there the latest 6 years as a tyer at the tyers row, well not hard to get a seat as I am the one organizing it :-). Anyway, this year  I decided that the crowd would get a chance to see someone else than my face at the row so Instead of tying at the row I helped my friends at Swedens greatest an most beautifull flyfishingmagazine, Flugfiske I Norden. And I must say as much as I missed my buddies at the row it was really cool to be tying alone at the magazine, i believe the crowd were calmer and not as stressed of neding to see all tyers at the same time, I had a busy and really enjoyable weekend, the saturday was maniac though 7200 people in one day. People really intested in this stuff should really learn to go on the friday or the sunday which always are more calm.

Here is how our wall looked, really nice with some really cool pictures taken by photografer Svanthe Harström. 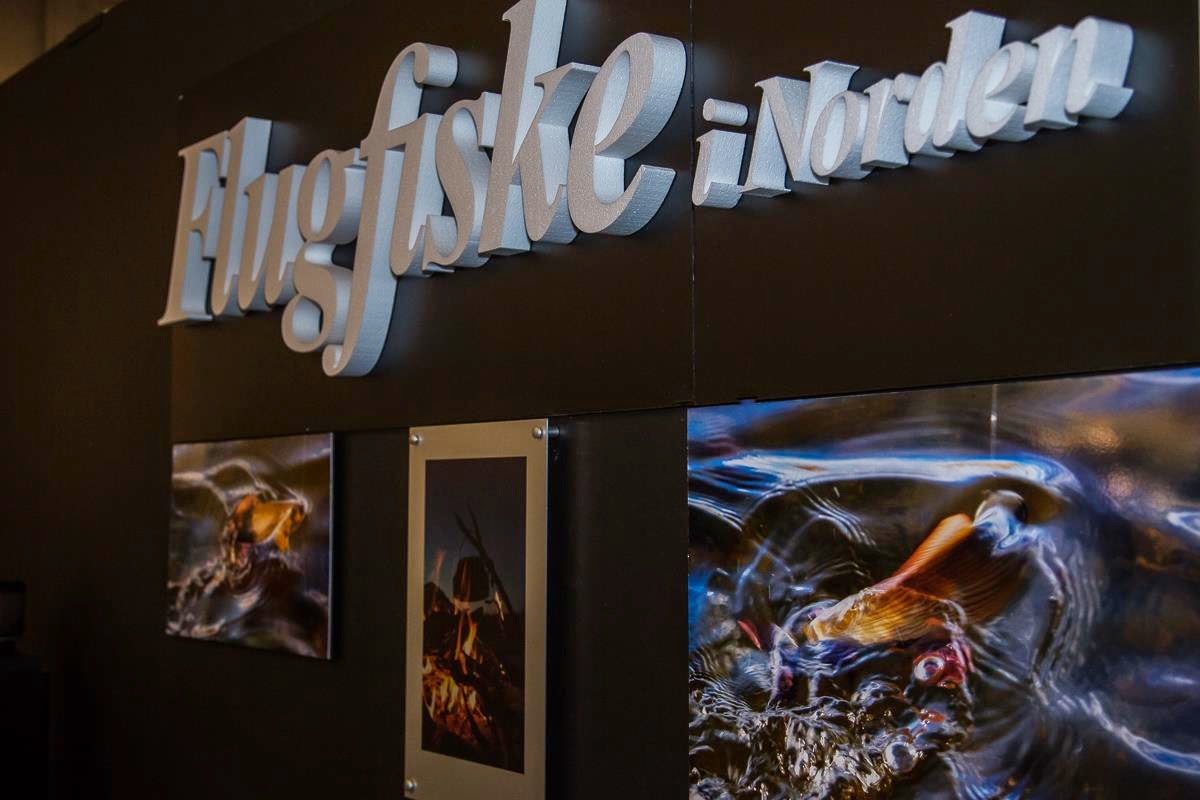 We had a really great crew in the both, we were lead by the boss William Moberg Faulds aperson who puts loads of efforts in running the magazine, more than anyone can imagine. We had Mr and Mrs Gullstrand helping us out with selling subsciptions and other stuff. Lasse Hallberg our editor, wow he was one great salesman, calm and full of knowledge I was really impressed by him. Svanthe Harström a really funny guy, also a great salesman and ambassador of the magazine. Not to forget Joakim Blomkvist, Christer Holmberg who also did a great job during the whole weekend. We had some other guys aswell helping out parts of the weekend, Mikael Åkerlund for example. We got 50 new subscribers, and several of our subscribers who extended their subscription for another year.

Here is me caught in action by another photografer, Joakim Blomqvist. 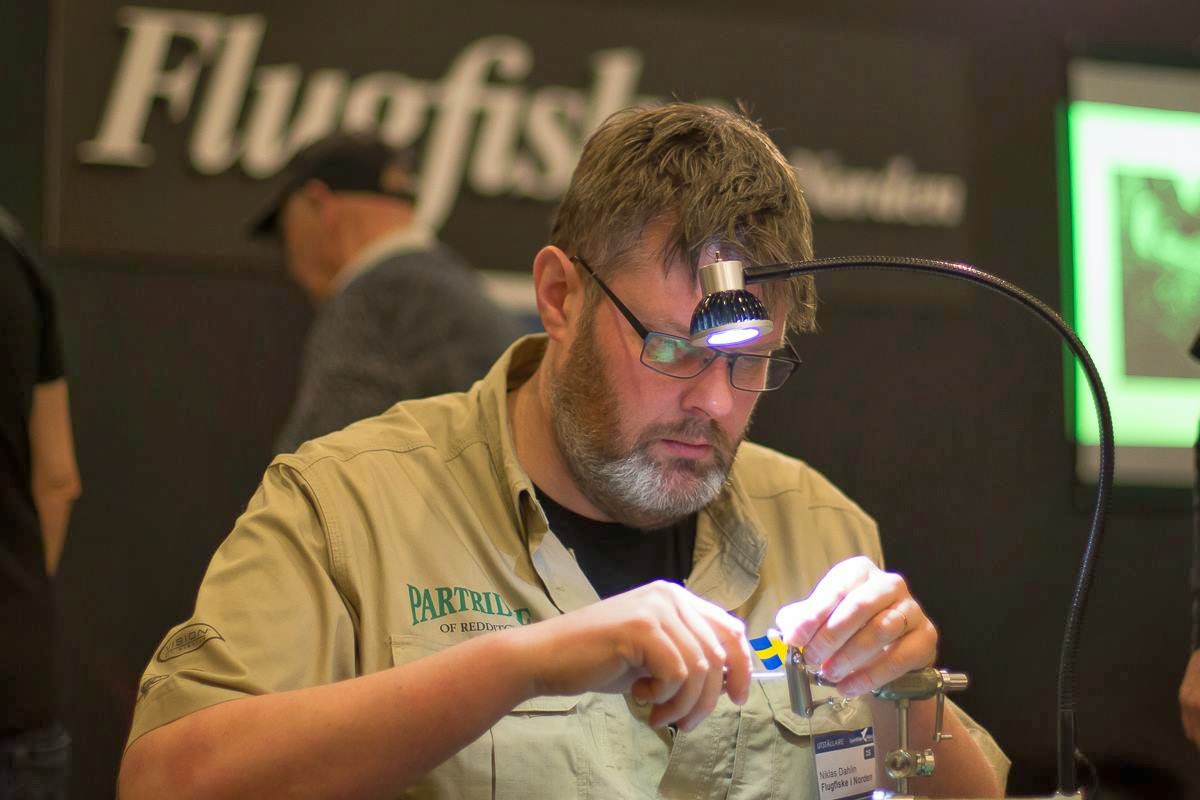 I concentrated on tying Catskill style dry flies, here my Variant of the legendary Quill Gordon, I call it the Rough Gordon. I really love this one, appealing for the eye aswell as for the tyer. 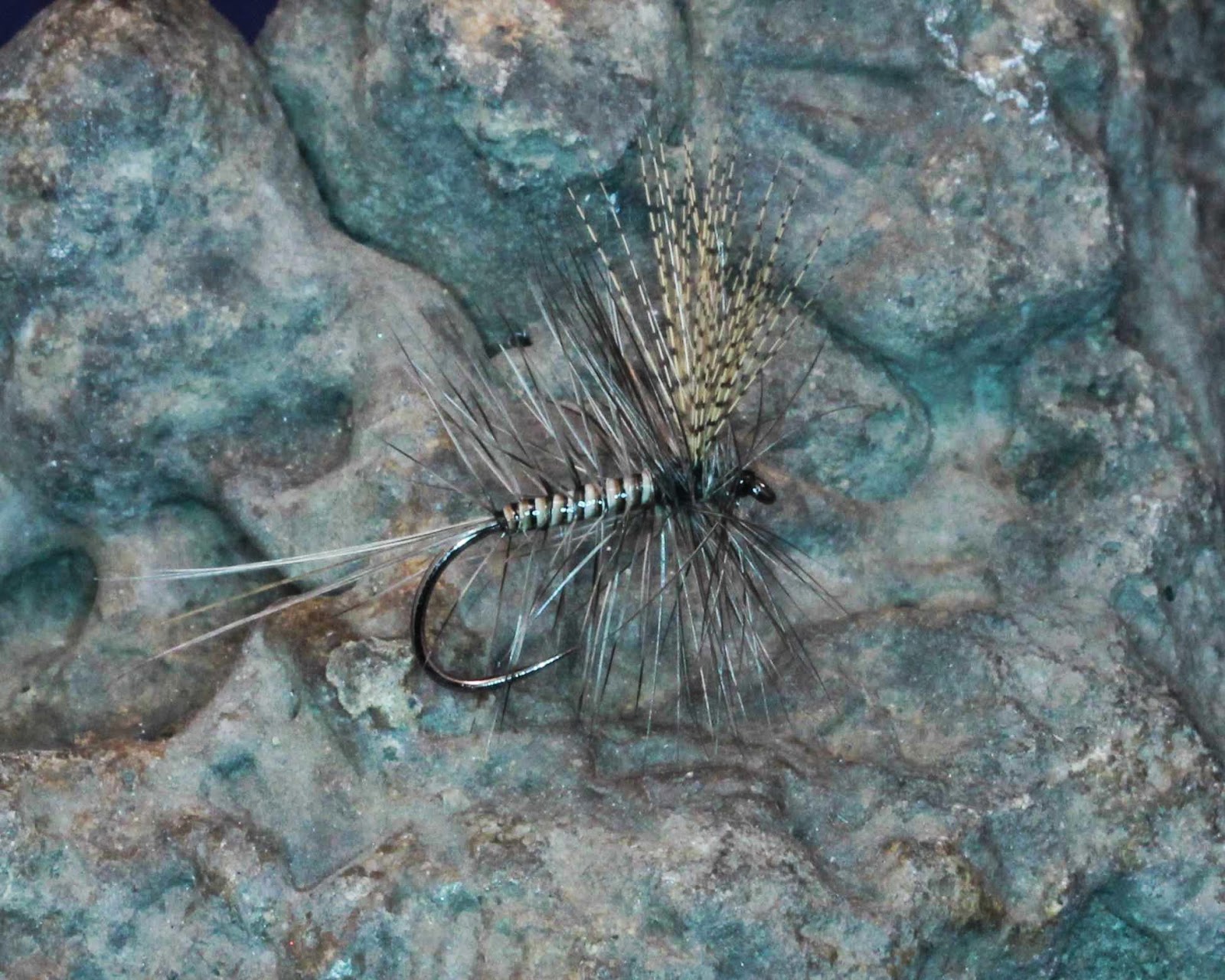 Also whipped up a batch of Dark Cahills. I had one of my newly founded buddies Jan Johansson joining me during the whole process in detail of making one of these puppies, and boy itś cool to see that he in only a few days after that session has improved his Catskills loads. Offcourse he got the fly to bring home as a momory of our session. I really enjoy these moments when tying at fairs when you get to meet poeple with a genuin interest. 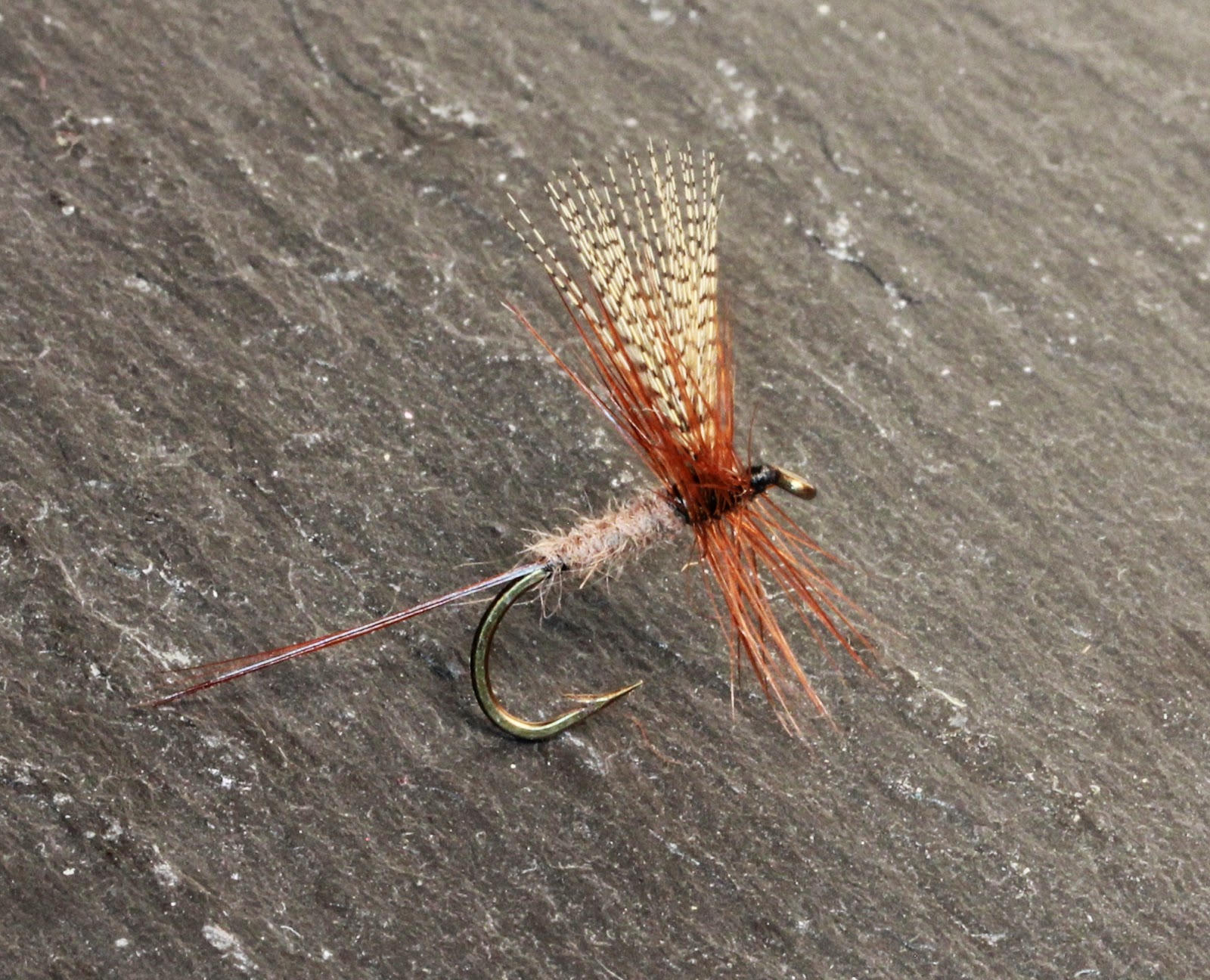 Also found some time to tie up some orders on my Steel Blue Quill. Itś great to after a while of tying 15 minutes flies just get crazy in making a batch of 3 minute flies :-) 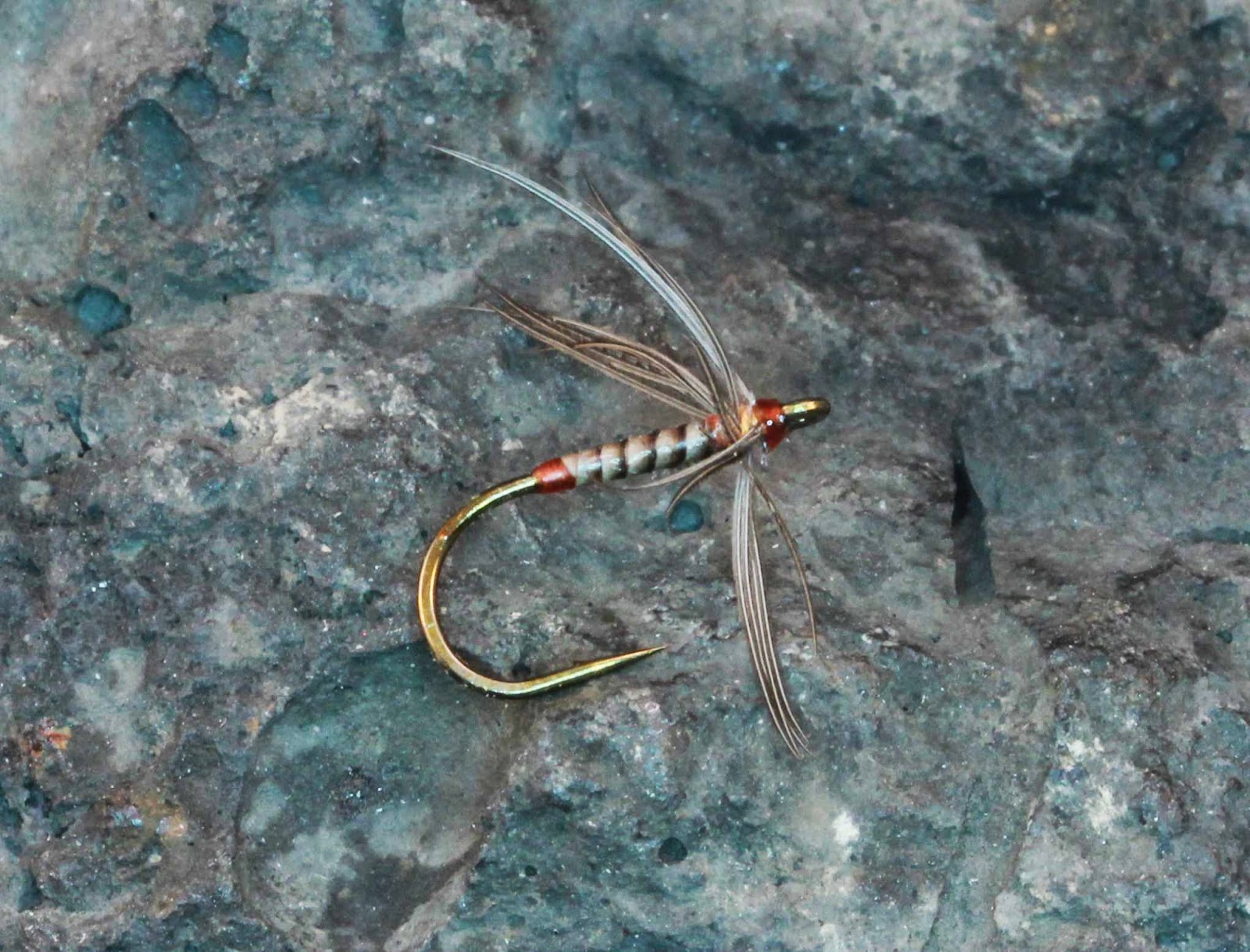 Also made a batch of Gunnar Johnssons Kneckestorparen for my own fishing, I have never tried it but  I really like the idea of this fly. 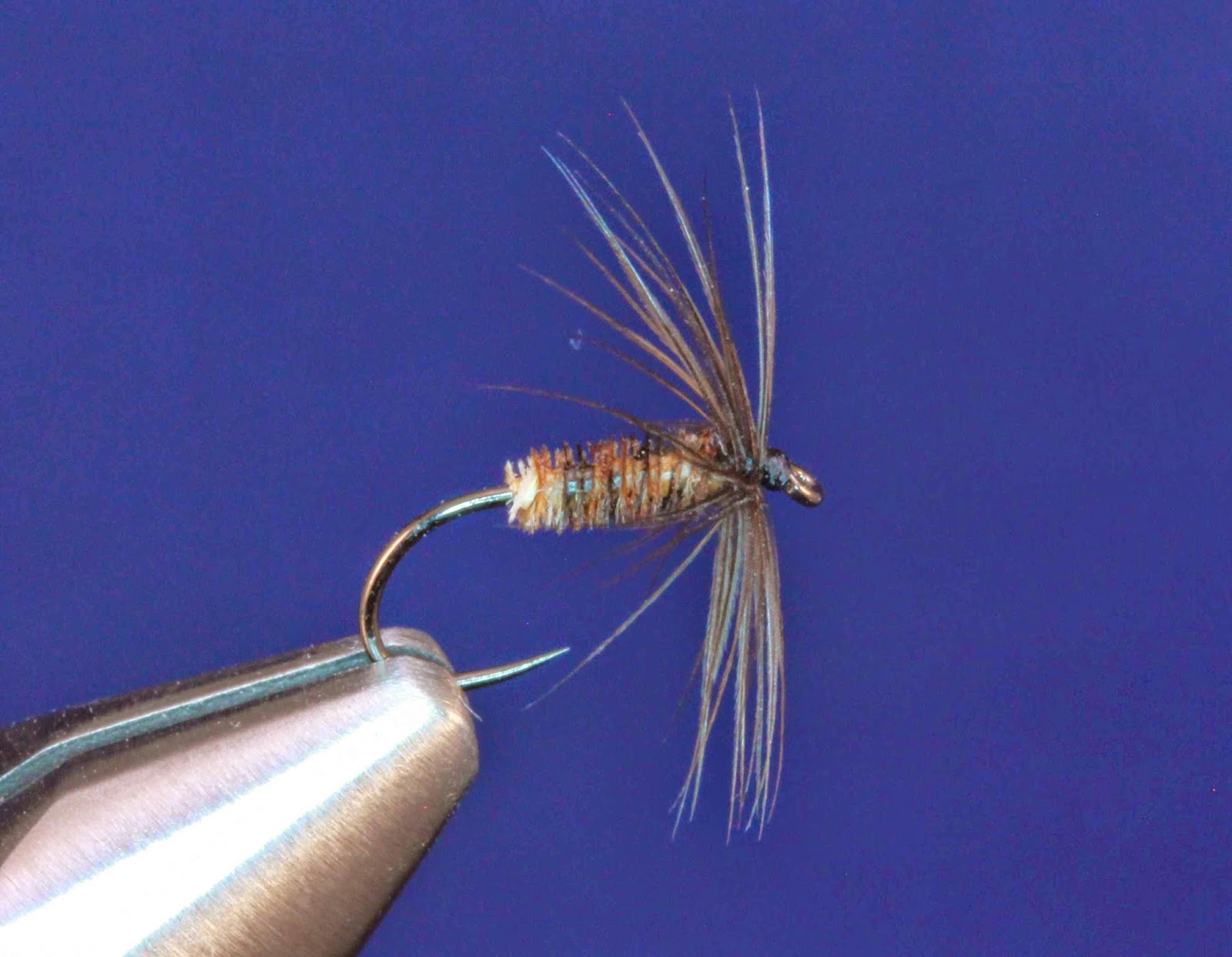 A sad thin happened while we were buildning the tyers row, while my friends Anders Grünning and Markus Hoffman helped me out building the tyers row somebody breaked in to Anders car and stoled Markus bag containing a whole winters production of display flies and flies that he was supposed to be selling at events during 2014, I dont understand why there are people out there who has the need to do stuff like this, sorry for your lost my friend. If any one see a batch of really ice wooden boxes with flies for sale by suspicious people, dont hesitate to contact me. Another friend Eric Andersson lost his camera at the fair aswell...

Next year the fair will be held in Jönköping, south of Sweden. Weĺl see if I will be int the both of the magazine or at the tyers row. Havent decided yet..

Over and out
Niklas
Upplagd av Niklas Dahlin kl. 01:44 2 kommentarer: