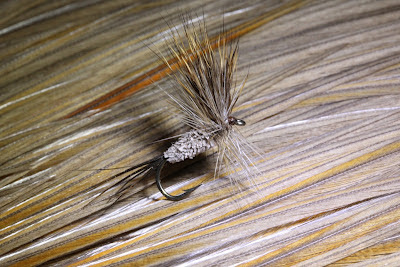 The fly Irresistible was a frequently fly tied by Harry and Elsie Darbee. The fly is one of the Darbee´s deadly dozen. In the book Catskill Flytier you can read that the fly was originated by Joe Messinger. It got it´s name throug that Joe sent a fly to Ken Lockwod in the hospital, Ken,  an outdoor columnist, said, "I haven´t used this one, but it sure looks irresistible." So through that it got it´s name.
Tail: Dark deer hair from body of white-tail deer.
Body: Dark grey clipped deer body hair.
Wings: From body of white-tail deer same color as tail.
Hackle: Dark rusty dun cock hackles
Hook: Sizes 10 to 14.

I have now during a couple of days worked pretty hard with tying der hair bodied flies. While doing them the biggest issue was getting a decent wing. Tried to do the wing first than the body, nope, didn´t like that. My major problem was offcourse while working with the hairwings as the tend to "bulk" a little behind the wing messing up the body slightly. I learned that I could repair the mess I made by taking a few strands of deer hair on the damaged area and tie it in on that spot. The one on this picture is one of the repaired ones, above just behind the wing... just some reflections...

A funny thing about tying the batch of Irresistbles. I tied a batch yesterday  took pictures etc.. started to write on a forum about te fly and then it struck me.. after five flies that were supposed to be according to Darbee´s Catskill flytier.. I had mixed the recepies.. so I had tied it with wrong wingmaterial, I used calftail instead of dark deer hair. So now I have to throw the ones with the wrong wingmateral away :?  .. kidding offcourse they will be used on wednsday and hopefully they will show me the way to a decent trout.

Over and out
Niklas

When visiting British flyfair a couple of years ago a bought a book by Harry Darby -Catskill Flytier. Harry Darbee are one of those guys responisble to that we today have something called the Catskill style dry flies. In his book he has a list of flies "Darbees deadly dozen", among these we find soem Deer hair bodied dry flise which were one of Harry and Elsies trademark. I have tried to tie the Rat faced McDougall before in my early days, not very succesfull though, it was before I got the proper material etc. Last week  I finally got my sticky ones on one of those Deer hair packers, so now it was time to try it out properly. 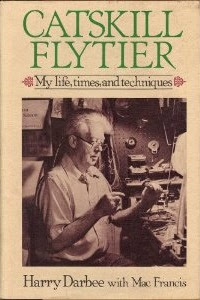 As with all old flies there is a story, I love those. In this case I found about how this fly got it´s name, found it in the book offcourse.

"As I was ting up an order of Bastards late one evening in the summer om 1939, Percy Jennings a amateur flytier from Cold Spring Harbor. Known among anglers for the time he cought a 3,5 pound brown on a backcast, came by our house. He looked down at my vise and asked why I didn´t tie the same fly on a smaller hook. He thought it would work better for the local trout population. I said, "why dont you do it" So he did, and it was while Percy was tying one of these that a young friend of his daughter, Mary Dimock came by. She saw the fly and said "Boy that´s got personality."Percy, knowing that the fly had a troublesome name among our more gentle fly-casting friends, rose to the chance and challenged Mary to give it a name. She was up to the chalenge, saying, "I think it´s a Rat Faced McDougal." And so the fly was dubbed."
-Catskill Flytier Harry Darbee with Mac Francis 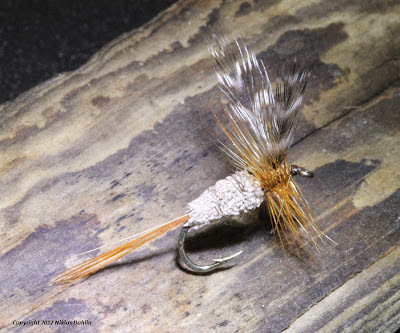 This is one of these flies you dont want too loose in your first backcast, it takes a while to get it proper. I fisrt tie in the tail, then the body in two portions. Then  Istart the cliping, which takes a while, and dont forget to watch that tail, you dont want to clip that off. Well, I´m quite satisfied with this one. Now let see if Percy Jennings was right about it´s "troutability".
Upplagd av Niklas Dahlin kl. 02:04 2 kommentarer: