Planning an early spring fishing in the “Charmed Circle of the Catskills”? do not forget to bring a batch of suitable imitations of Ephemerela Subvaria, one of the American fly fishers most important mayflies.

The hatch of this important specie starts in the Pennsylvanian streams in late April and has it’s peak in the Catskills in mid may, and later the longer up north you get. After the first mayflies have shown themselves you can count on about three weeks of fishing.

There are two flies with legendary status that are made up to imitate the Ephemerela Subvaria, the Hendrickson and the Red Quill. The reason because that there are two different flies to cover this mayfly are that the male and the female of this specie have a distinct difference of colour. Another thing to have in mind are that they seldom hatch in the same riffle, because of this the fish can get quite selective sometimes. Good thing for the fly fisher is another of the characteristics of this mayfly, it have a habit of spending quite some time on the surface before it leaves the stream. So to be sure, have an imitation of both the male and the female mayfly in your box. 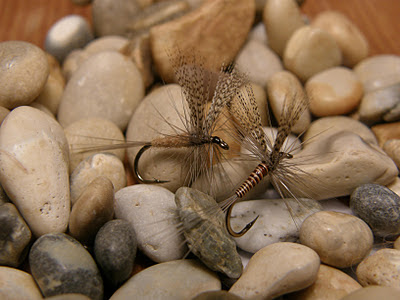 The Hendrickson
The originator of this fly is one of our early Catskill tyers, Roy Steenrod of Liberty. Steenrod was thought to tie flies by the biggest of them all, Theodore Gordon. Gordon did actually give Steenrod his first vise.

The fly was originated 1916 after a fishing trip, the fly proved itself and after two years Steenrod´s friend asked why it didn’t have a name, “well” said Steenrod while looking at his friend A.E. Hendrickson “it’s a Hendrickson”, wonder if he realized that this fly would become one of the most popular flies imitation of the Ephemerela Subvaria in America. Steenrod tied his Hendrickson in different shades to match the hatch just as Gordon, his teacher did with his Quill Gordon.

Red Quill
One of my absolute favourite “Catskill Style dry flies”, the Red Quill is this species female imitation. The fly was originated 1933 by Art Flick another one of our Catskill heroes. In his book the Streamside Guide he humbly claims himself to be the first to use hackelstem for body material. Unfortunately he was wrong about this as you can read about it being used as body material on a red spinner pattern in McClelland book Tying Flies for Trout & Grayling from the 1890´s

There are several ways of obtaining hacklestem for body material. The old way is to soak the feathers, Flick said to soak the feathers over night, then rip the fibers from the stems. I find this to be quite messy and that you just don’t rip fibers from the stems, also some of the colour. I put my feathers in a solution of 50% water and 50% Clorox, after 2-3 minutes all the fibers are gone. This way might make your stems slightly brittle, but if you soak them properly in warm water for a while before using it shouldn’t be a problem. There are also some companies that sells pre stripped hacklestem, unfortunately the ones I have tried haven’t been to my satisfaction. 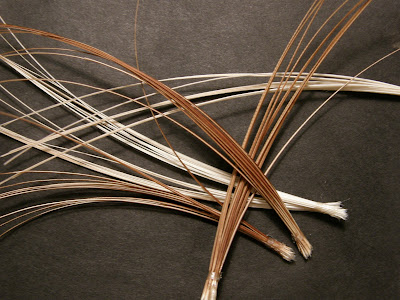 Give yourself a chance to add another dimension to your flyfishing, give these two legendary flies originated by heroes of the past a chance. I bet you will make room for them in your flybox as well as in your heart, not just for their seducing looks but also because of their effectiveness.
Upplagd av Niklas Dahlin kl. 06:46 4 kommentarer: