In January I sent a a set of flies to participate in a flytying competiton in the states The Southern Appalachian Flytying Championship. Last week i got the result, I found myself on third place, offcourse I´m honoured. The winner was Wayne Samson and on second place Mr Deer hair specialist Chris Helm, well done mates.. I got a really nice prize a fly tied by Mary Dette, "the Kaaterman" a glasdome to mount it in and also really nice print of my fly. There was also a 25$ check but that I asked them to send to the Catskill Flyfishing Museum. 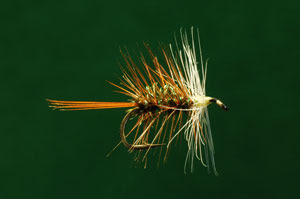 We were supposed to tie two flies, one mandatory on "The Tellico Nymph". This fly kind of caught me, it was funny to play with something I never tied before. By the way.. thank´s Håkan for helping me with the materials I didn´t have in my stash..

﻿
Then there was the other fly.. Here I wanted something really special, something from my heart. So I choose my favourite fly "Quill Gordon" and added something to that, thought I would do a version of it to match the situation when you want a more boyant fly, to use when the water is a little rougher. I added a body hackle, not a full one though cause I still wanted to see the peacock quill properly. I simply stripped one side of the hackle and to make sure the hackle didn´t slip on the quill I added a thin layer of superglue before wrapping the hackle. Personally I think the fly looks really toxic and I can´t wait to try it out this coming season. 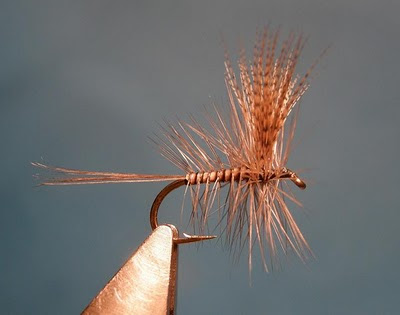 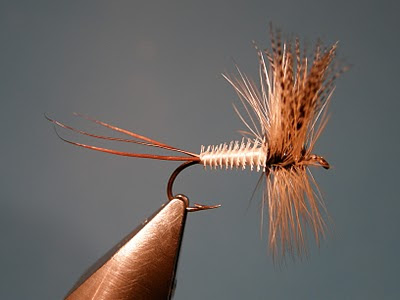 "The Coffin Fly" was first designed by Walt Dette and his friend Ted Townsend in the beggining of the 1930´s. Walt did over the years work on the pattern making several improvements, It is still today a popular fly in the Catskills. The fly is supposed to imitate a spent Ephemera Guttulata or more common named Green Drake the largest of the mayflies within the charmed circle of the Catskills.
Upplagd av Niklas Dahlin kl. 12:05 3 kommentarer: 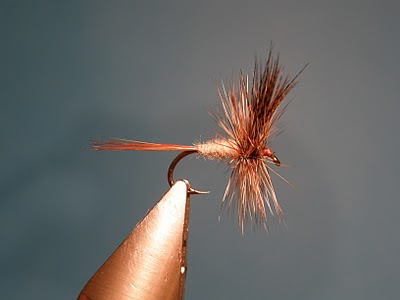 The March Brown is a name of a fly that has been mentioned in fishing literature for hundred of years. The March Brown I tied here is not that old. The American March Brown was originated by Preston Jennings and he has it published in his book “A book of troutflies” as a imitation for the American March Brown. Mr Jennings was experimenting on how light refracts off a insect on the surface, and how the trout perceives such light, this and more made Mr Jennings to come up with this pattern, one of the more known Americna dry fly patterns.


His "A Book of Troutflies" was first published 1935 and was the first book that gave the American fly fisherman a good reference to American trout stream insects. Mr Jennings was a highly regarded angler and fly tier.
Upplagd av Niklas Dahlin kl. 12:25 1 kommentar: