One of the most significant characteristics of the Catskill style dry flies is the split wing of wood duck. There are, however, really nice patterns in the genre without the magical wing of wood duck. Here we will learn a little of one of those patterns, one of my personal favorites, the grey fox variant. The pattern was created by Catskill celebrity Art Flick. The fly was of what I heard one of the flies Flick had closest to his heart. Flick tied the Grey Fox Variant to imitate the green drake in his beloved Schoharie Creek. He says in his Streamside Guide, “So far the most effective fly to fool large trout feeding on natural green drake is a very large grey fox that has been tied with good stiff hackles”.

Art Flick at his vise 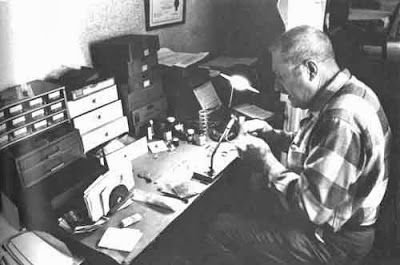 Many of those familiar with the variant patterns think that it was Art Flick who originated it however that is not entirely correct. Flick learned of the pattern by his master Preston Jennings, author of The Book of Trout Flies. Jennings’s book tells us that the variants originally came from an English tier, Dr William Baigent. So we could say that Baigent originated the pattern, Jennings discovered it and finally Flick made it known to the modern world by his book Stream side guide.


I meet the variant for the first time in one of our Swedish fly tying legends, Lennart Bergqvist´s book Flugbindning på mitt sätt (Flytying my way), Bergqvist writes that his friend Paul Jorgensen told him to tie some of the variants for an upcoming trip to the Catskills, he didn’t like them at first but after a while he discovered it as a great attractor pattern. At this time I was a beginner within the world of fly-tying, and this fly had it all, I loved it´s appearance and it was fairly easy to tie. I tied loads of these and after a while all my flies had bodies of stripped hackle stem. Actually this fly was the one that got me interested in the Catskill style dry fly. I use these flies on both trout and grayling, I like to tie them really small for the grayling, my favorite is a size 18 gray fox variant, and the grayling love them.


I tie my gray fox variants with a slightly shorter hackle and tail than what Flick did; I believe that the fly is better balanced this way. Flick mixed light ginger, dark ginger and grizzly for hackle but I used coachman brown mixed with grizzly, mostly because I don’t have dark ginger.  I fish the fly as free drifting as possible, now and then I make it move that can sometimes trigger the fish to strike, a great fly to use when there´s low activity on the surface. As some will notice I use a different way of hackling this fly than what most traditional Catskill style tier’s do, I tie in the hackle at the front and wrap it backwards, finishing the fly by securing the hackle with the thread. This way I belive that I get a slightly more durable hackle , this way also give the fly a neater head.


An important issue with making flies with hackle stem bodies is that you need a nice and even foundation for the body. I use Textreme 8/0 that is thin, strong and I can easily get it to lie flat on the hook. When preparing a lighter shade hackle stem for the gray fox variant I just rip the fibers from the stem, but when working with hackle stem of color, like a natural brown/red hackle, I burn the fibers away in a mix of bleach and water. If you rip off those fibers some of the colors also disappear.


This is what you need to tie a Grey Fox Variant, my way. 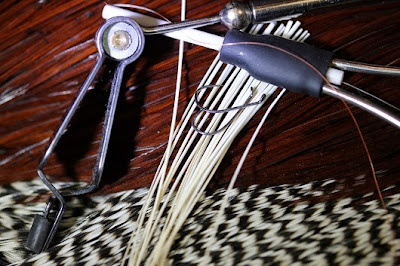 
Tie in your thread, start 1/3 down from the eye of the hook, tie thread down to where the bend of the hook starts. 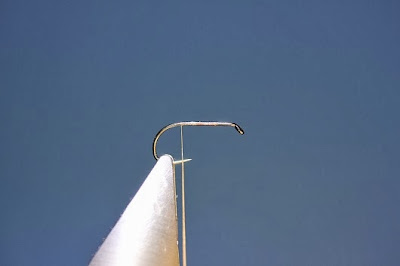 Pick out 8-10 nice stiff spade hackle fibers as tails and tie them in, make sure they stay on the top of the hook. The tail need to be 2 times the length of the hook. Wrap the thread up to where you tied in your thread. 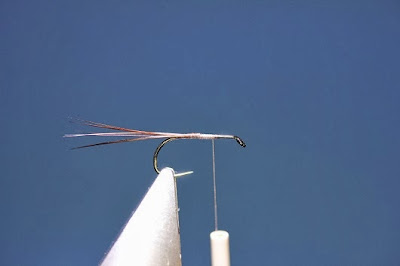 Tie in the stripped hackle stem by wrapping your thread down again to the tail, make sure you have a nice even underbody. 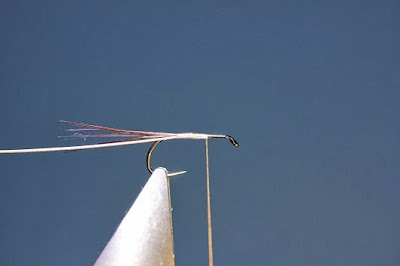 Wrap the hackle stem in tight turns towards the point where we tied in the thread from the beginning. I try to finish the hackle stem under the hook, secure it with a couple of turns and make sure to cut the excess close to the body to avoid too much bulk. 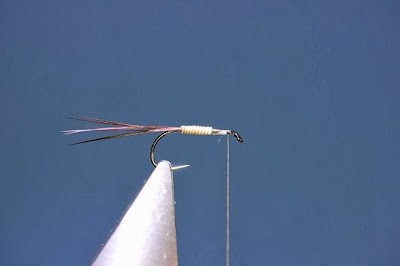 Measure the length of your hackle feathers, 2-2,5 the hook gape. Tie in both of the feathers just behind the hook of the eye. I tie it onto the hook with an X winding which leaves the feathers in a 90 degrees angle to the hook. I wrap the brown hackle first because of that I make sure that that feather comes first. Cut excess when done. 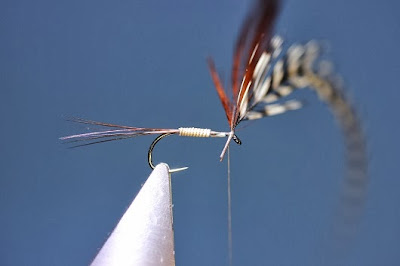 Leave the thread where the body starts. 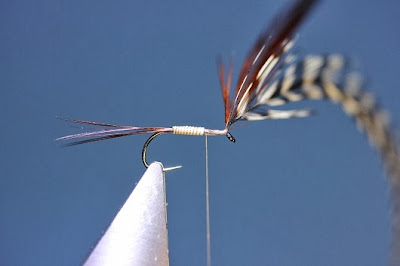 First wrap the brown feather, secure it with two wraps, and don’t cut waste yet. 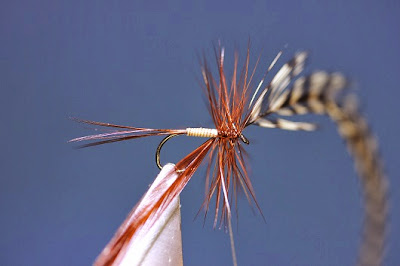 Now wrap the Grizzly feather, make sure that you hold it quite hard and really work the feather through the brown hackle, and do not end the feather at the same spot as the brown hackle that will give you unnecessary bulk. Now make sure to spin your bobbin, we don’t want a flat thread when working the thread through the hackle, which will mess up the hackle. Now wrap your thread through the hackle, again a good tension on the thread. When at the eye of the hook make two knots with your whip finisher. 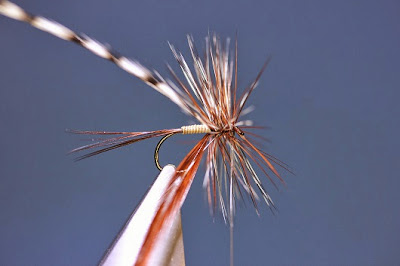 Now work with the hackle, pull it too straight out those irritating fibers. Cut of the ones who give you too much trouble. 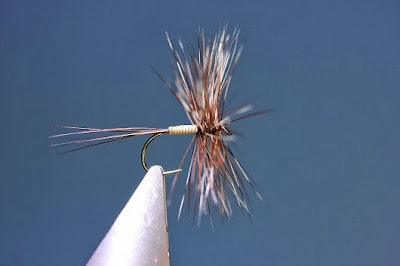 Flick used lacquer to seal his quill bodies, I use UV resin instead which gives me much better control, less smell and dries instantly. 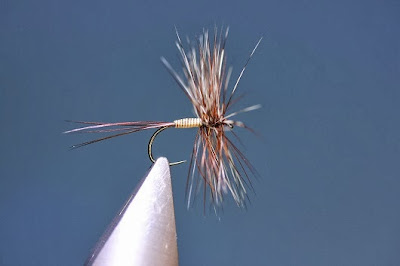