Some time ago when I was messing with flies from Harry Darbees book Catskill Flytier I stumbled on a interesting pattern called Irresistible. Tied a couple but I didnt have the proper material for the tail and the wings, I hadto do it with deer hair which isnt any good for that, deer hair has too much air in its fibers so it just gets messy. The other day  Igot a piece of  White-Tail deer body sent to me from a over sea friend, Jack Fields from Central Pennsylvania (thanks Jack). And what a difference it made.

The hardest part of these flies is that you need to tie the body first and then the wing, it gets kind of crowded. On this fly the wing was mounted slightly to long toward the Eye of the hook, I will try to make one more proper later on. 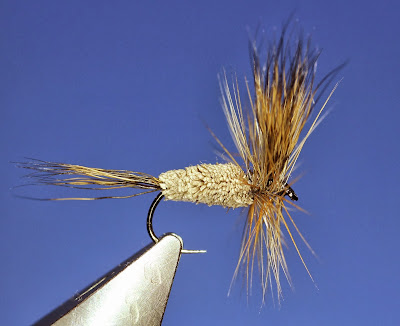 In the book Catkill Flytier you can read "Originated by Joe Messinger. Joe sent his fly to Ken Lockwood in the hospital. Ken, an outdoor columnist, said, "I havn´t used this one, but it sure looks Irresitible" from there got its´name.

Time to hit the sack..

Messing with a classic

Theodore Gordon’s Gordon Quill, proborably more known as Quill Gordon is one of my absolute favourites, to tie and to fish, both equally important. This fly work fantastic just as it is but during a fishing session I noticed that my way of fishing needed a slightly more buoyant Quill Gordon. I considered the fact of trying to become a better caster or a fly fisherman but came to the resolution that it was no point of trying that. So I decided to mess with the Quill Gordon and give it a body hackle that would give the fly longer drifts, especially in rougher water. 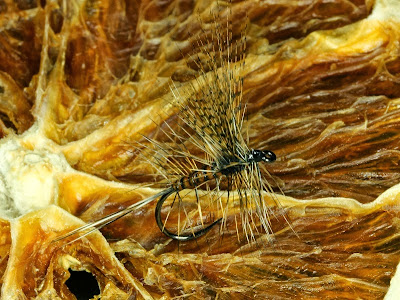 Normaly a body hackle takes away a lot of the body material effect. To prevent that from happening I decided to peal off the fibres on one side of the body hackle. This and the fact that I wound the hackle quite sparse gave the body that nice look only a stripped peacock quill can make. Another problem that I thought I could stumble on was the fact of that the hackle could slip on the quill body, I solved that by adding a thin layer of clear super glue before wrapping the body hackle. Finally  I got my fly as I wanted it, a fly with good buoyancy and with a nice visible quill body.


Besides from the fact that this fly works, I actually sent a sample of the fly to the Southern Appalachian Fly tying contest 2011, It gave me a third place. There’s off course a lot to say about competing with fly-tying, but I’m really proud about it. The one sent in for the Contest had a natural coloured bydyquill and hackles from a dark dun cock neck. The one shown here has a dyed brown quill from Polish Quills and hackles from a grizzly/cree coloured cock neck. The fly is tied on a size 14 Partridge SLD.

Over and out
Niklas
Upplagd av Niklas Dahlin kl. 13:52 4 kommentarer: